This page is about the model hovercraft I've built recently. It's 24 inches long by 18 inches wide and is powered by an OS .40 FP nitro engine. The prop is a standard 10x6 model aircraft prop. The bottom is made from 1/4" marine plywood. The sides are made from 1/8" 'Masonite' board, the top is made from fiberglass, and the skirt is made from neoprene coated nylon (just like the big guys). Sorry, I'm not making the plans available at this time.

The craft utilizes an integrated lift/thrust system which passes air by 3 rudders while also into serial-feed bag skirt. The craft weighs in at just over 10 lbs wet.

I designed it to be as simple and easily as maintainable as possible. It uses standard model airplane starter, glow plug lighter, fuel system, servos, etc. I learned this lesson after trying to design my first few models too cleverly and would spend most of the time fixing things on them. With this one, I just crank it up and play. The only time it's really needed repairs is when I was flying it up a road and a wind gust blew it over... ouch! I haven't calculated the top speed or anything but I would estimate that it goes around 20 - 30 mph.

Nope, doesn't work on grass but Eric Goldstein is working on that problem. ;-) 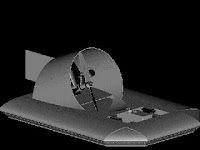 Here's where it all began. Notice the big-heavy duct which it won't have and the one rudder which is now three. Everything else actually went according to plan as you can see below. I even used the Autocad drawing to print out full-sized templates which I used to cut the sides and the styrofoam plug from which I made the top.

Here's a picture from the top. Notice the rudder push stick on the port side of the craft. The radio is an older Futaba 6 channel. Now, what am I going to do with the other 4 channels? Hmmmm... ;-)

This is a view of the receiver/servo/fuel compartment. I made it a recessed area in the hull which will theoretically be the last place to flood if the craft gets swamped or starts to sink for some reason. If I were ever to get really serious about using it over water, I would probably outfit this comartment with a sealed top and make it as watertight as possible. Notice the two servos. The one on the left is for the throttle and the one on the right is for the rudder control. The battery is to the upper right of the fuel tank and the receiver is to the lower left . The left line from the fuel tank is attached to the muffler to pressurize the tank while the right line goes to the engine carburator. 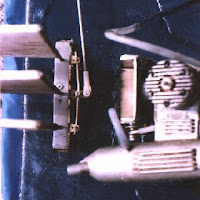 This is a view of the rudder assembly. The center pivot goes to the pushrod via an 'L' arm at the left rear of the craft. Each rudder control arm is just a regular collar used on model aircraft landing gear (to hold the wheels on) with an arm soldered to it. Simple and effective. The collars are pushed up hard against the rudder mount while the bottom of each rudder rod is set into a depression in the bottom of the craft. This keeps the rudders from moving around or coming out. You can see where the fuel tank lines attach to the engine. 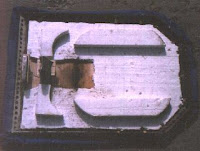 This picture of the inside of the craft shows the white styrofoam which serves not only as flotation but also to direct air within the hull. Notice all the little holes in the sides? That's to feed air into a segmented skirt in the future (probably not gonna happen though). ;-) 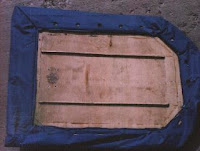 This is a picture of the bottom of the craft which shows the holes through which air is fed into the cushion from the skirt. Also, you see the landing skids that keep the craft from tearing up the skirt when it comes off-cushion. The skirts are attached by using old windshield wiper inserts (with the wiper removed). The inserts are glued around the top of the sides and the perimeter of the bottom about 1/2" in from the edge. The skirt material is then placed over the insert and a wire is pressed into the slots thus trapping the skirt material. You can see one of these wires that I pulled up for the photo. at the lower left of the craft. A closeup of the corner is shown below.

Here's the closeup of the corner. The old glue spot just above the skirt attachment point is where I attempted to glue the skirt before. Forget it! 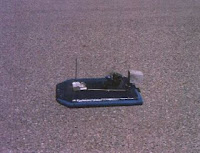 Here's a side view of the craft in action. The antenna is just a tube with the receiver's antenna wire fed through it.

Here's the one time the little craft has ever seen water. Skimmed right over it like there was nothing there. I feel pretty confident that it'll work on the real thing.


And it did! I took it up to Vega Reservoir and turned it loose from land where it hovered right onto the water and started skimming along nicely but making sluggish turns as compared to land. I then set it down on the water and then took off from a dead stop and found that it took quite a run to get over hump. This is most likely caused by the model being overweight and/or underpowered. Can't do much about the power since I'd like to stay with the current engine so I'm rebuilding the craft out of much lighter materials such as 1.45 oz glass fabric instead of 6 oz and 1/8" ply instead of 3/8" ply.


Transitioning from water to an island to water again.

Skimming straight towards us.