Welcome to the new home of The Hovercraft Homepage.  I had originally developed this site back in 1996 under the web site URL iti2.net/aolshove/hover.html to provide basic hovercraft-related info to the web as there was very little information available at the time.  In 2000, I bought the domain www.HovercraftHomepage.com which I used until 2008 at which time I allowed it to expire and used only www.Olshove.com/HoverHome which brings us to 2010 at which point I retired the original web design in favor of a blog type maintenance.  I have omitted several pages keeping only those for which I've seen the most activity.  If you are missing a particular page, email me at the email in the "Contact Info" below, and I'll work to recreate the page here.

My interest in hovercraft began back in 1985 when I stumbled across a volume of "Jane's Surface Skimmers" in my high school library.  In 1997, I constructed my first hovercraft (the one in the image on the left below) which was a Universal Hovercraft UH-12R designed by Bob Windt.  There's a link on the left that cronicles the construction of that craft.  In 2000, I sold that UH-12R and purchased the original Sevtec Vanguard  prototype from its second owner, originally designed and constructed by Barry Palmer of Sevtec SEVs.   I restored and sold that hovercraft after an unfortunate incident where it flew off the trailer onto the highway on the way to the NW Hover-In.   I inherited my last and final hovercraft which was a 14' Sevtec Vanguard (pictured on the right below) from a gentleman from Seattle in 2001.  After years of use, the wood top deteriorated and I restored it in 2005 with a fabric top and pressed it into service again until 2008 at which time I sold it to gold prospectors in Alaska and am not currently in possession of a hovercraft.  My current hobby is restoring a 1968 Ford Mustang Convertible. 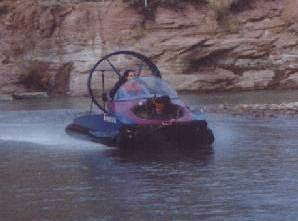 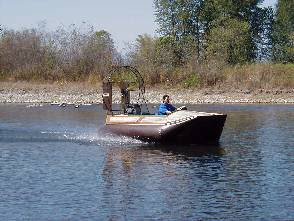 In February of 1996, I began the process to create a hovercraft newsgroup on Usenet called alt.rec.hovercraft which has been in use ever since.  You can still participate via Google Groups.

More recently, however, people are fond of internet forum sites such as HoverLovers on Yahoo Groups.